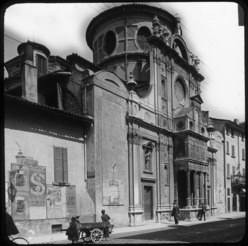 The original simple chapel was extended to form a complex structure with refined decoration according to well-established Lombard formulae. The ornamented facade is attributed to the sculptor and architect Giovanni Antonio Amadeo (elsewhere to Giangasparo Pedoni). The building was bombed in WWII and largely destroyed (and rebuilt), but the original facade was saved. Amadeo made considerable use of all'antica ornament. Antonio della Porta’s earliest documented works are here as well; twelve figures of angels, three reliefs of church fathers and two medallions, for which he was paid in 1489. The graceful music-playing angels, with their elaborate, stylized draperies, recall Giovanni Antonio Amadeo’s angels on the façade of the Certosa di Pavia.