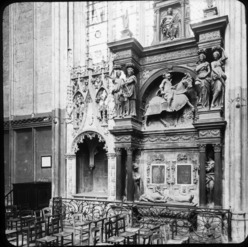 This has been attributed to Jean Goujon. However, the marble sculptures on the tomb (1544) of Louis de Brézé, husband of Diane de Poitiers, do not correspond to Goujon’s style in execution; it is possible that he provided only the design for this remarkable two-storey classical structure, which has Corinthian columns on the lower tier and pairs of caryatids articulating the upper register.