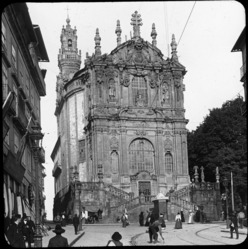 Part of a programme of building Baroque churches and noblemen’s houses, which was encouraged by the Church in the 18th century. The Baroque campaign is strongly Italianate, largely because it was planned by the Tuscan Nicolau Nasoni. He altered and decorated the cathedral and in addition to numerous palaces, he designed two buildings near the cathedral that gave the city its dramatic skyline: the oval S Pedro dos Clérigos Church (1731-ca. 1750) and its tower (h. 75.6 m, 1757-1763), and the former Episcopal Palace (from 1734). Nasoni is buried in the crypt of the Clérigos Church.