Testimony, Memory, and Intertextual References: Shakespeare's Presence in the Works of Primo Levi 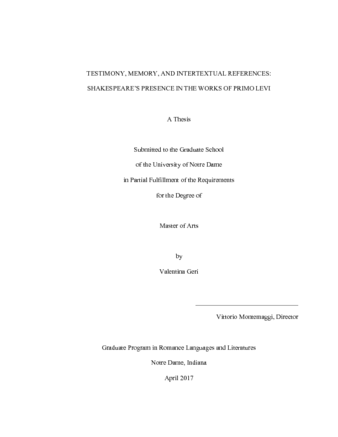 This thesis deal with the theme of intertextuality in the works of Primo Levi and on a specific case of intertextuality, that of Shakespearean direct references in Primo Levi’s oeuvre. The aim of the thesis is to show that intertextuality is a fundamental feature of Levi’s writing, and that intertextuality should be considered in relation to the two other common themes that characterize Levi’s texts: testimony and memory. Testimony and memory, which are connected in Levi to a personal experience, that of being first a prisoner and then a survivor of the Holocaust, are, at the same time, the trigger of narration. Therefore, writing, in Levi, is already a mix of different operations, namely an act of witnessing and of recalling. It becomes yet even more peculiar, since the memory involved in the narration is also the memory of past literature. Levi’s work is very rich in references to other literary works and these seem to be even fundamental in some texts. This is the case of Shakespearean references or quotations. In Levi’s texts, Shakespeare is indeed quoted or referred to in crucial parts, that is when Levi speaks about his main ideas and thoughts. Thus, King Lear is quoted when Levi deals with literary creation; references to Macbeth are found in the reflections on memory and the relationship between rationality and irrationality (characterizing both the contemporary world and that of the Holocaust); Hamlet is referred to when dealing with the themes of interiority and of the subconscious; finally, a quotation from Measure for Measure is used at the end of the chapter in which Levi describes and defines the “grey zone.” In conclusion, I can assert that Shakespeare’s texts and his characters are not just quantitatively present in Levi’s narrative, but they appear in every text that is a sort of turning point of Levi’s intellectual and literary reflections.