Baalbek: View of the monolith known as the "Stone of the Pregnant Woman" 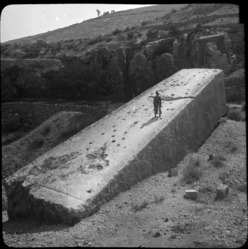 The “Stone of the Pregnant Woman” (Arabic: Hadjar el Hibla‎) or Stone of the South is a Roman monolith. Together with another ancient stone block nearby, it is among the very largest monoliths ever quarried by men. The two building blocks were intended for the close-by Roman temple complex − possibly as an addition to the so-called trilith − whose monolithic gigantism remained unparalled in antiquity and beyond.