The Language of Order: Latin, Greek, and Roman in the Byzantine Book of Ceremonies 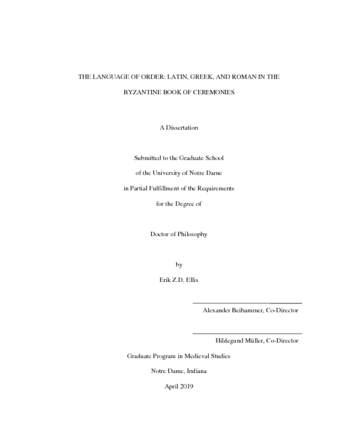 This study of Constantine VII Porphyrogennetos’ De Cerimoniis, a compilation of old and new material produced under imperial patronage during the middle of the tenth century, focuses for the first time on the significance of its language. Rather than treating the book as a source for the reconstruction of ceremony, as has been traditional in the past, it looks at the place of ceremonial language in Middle Byzantine culture and its wider social functions.

By examining the place of Latin in the specialized linguistic register of De Cerimoniis, this study challenges received wisdom on the place of Latin in Byzantium and the relative prestige of Latin and Greek both within the tenth century and across the long centuries of their contact and mutual influence. Turning to the Greek of De Cerimoniis, the study presents a typology of “technical Greek” to explain some of the linguistic peculiarities of what scholars are now calling the “middle register” or “literary koine.” The linguistic and stylistic features of this register furthermore reveal De Cerimoniis to take part in the long tradition of “practical philosophy,” which encompasses both technical treatises and the moral encheiridion.

The study also places De Cerimoniis in its wider cultural and literary milieu, focusing on how the text both reflects and projects a deeply philosophical and theological vision of the ways by which language and ceremony have real effects in the world and how Constantine VII understood his book as an essential tool in his project of recovering the Roman past and restoring cosmic order. In this regard, this study seeks to connect Constantine VII’s programmatic statements to traditional concepts of mimesis, anamnesis, and liturgical realism along with contemporary speech-act and performance theory.

Finally, the study looks at the place of De Cerimoniis within the corpus of works produced under Constantine VII’s name, especially the Vita Basilii. De Cerimoniis emerges as an essential and culminating project in the work of the Macedonian dynasty to “recover” order. This study proposes that the “Macedonian Renaissance” be understood as a two-step project, beginning with “analepsis” of the past and pointing towards an as yet unrealized “katalepsis” of an idealized future. In this conception, De Cerimoniis is the practical outcome of Constantine VII’s desire to build on the achievements of his predecessors Basil I and Leo VI. Through ceremony, the basileus and his basileia begin to reflect heavenly rather than historical taxis, and Constantine VII imagines the possibility of directing his empire towards the fulfillment of its transcendent destiny.