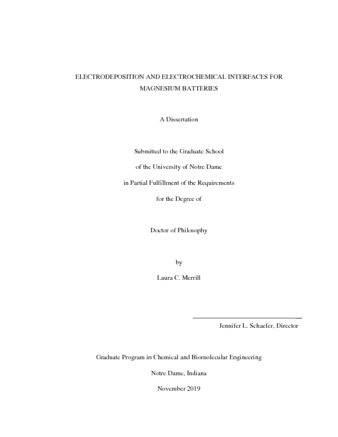 Rechargeable batteries are used in a number of applications including portable electronic devices and electric vehicles. Batteries are often viewed as the largest and heaviest component of these devices, therefore research often focuses on increasing the energy density of the battery. This will ultimately decrease the size and/or mass of the battery when employed in a device, vehicle, or other application. One approach to increased energy storage density is to increase the capacity of the electrode materials by using metallic anodes. Replacing an intercalation electrode, which is the type of electrode used in commercial lithium-ion batteries, with a metallic anode will remove inactive material from the battery. In addition to the increased energy density, it is necessary for battery materials to be abundant and safe in order to be employed at a wide scale. Moving away from lithium based materials will enable the widespread application of batteries.

Magnesium metal is an anode material with widespread abundance in both the earth’s crust and brines, and the magnesium resource is considered by the US Geological Society to be “virtually unlimited.” Furthermore, magnesium metal has a large theoretical capacity that will enable a high energy density battery (3800 mAh/cm3 versus 2100 mAh/cm3 for lithium). Despite the attractive qualities of magnesium, a magnesiated form of an electrolyte used in lithium or lithium ion batteries cannot be used directly in a magnesium battery. Many common salt and solvent materials decompose on the surface of the magnesium metal and form a passivating layer opposed to an ion-conducting solid electrolyte interphase (SEI). Common electrolytes that enable highly reversible magnesium electrodeposition (charge, deposition; discharge, dissolution) use highly flammable compounds such as tetrahydrofuran (THF) and Grignard reagents. Research efforts have focused on developing electrolytes with increased thermal stability and decreased corrosiveness in order to lead to the eventual application of magnesium batteries.

In this work, the solution equilibrium of magnesium bis(hexamethyldisilazide) (Mg(HMDS)2) based electrolytes and the effect of equilibrium on the electrodeposition/dissolution of magnesium is discussed. It was found that Raman spectra and 27Al NMR have signatures that can indicate the performance of the electrolyte. Furthermore it was found that solutions containing higher proportions of MgCl+ cations, instead of Mg2Cl3+ cations, had decreased electrodeposition efficiencies.

The Mg(HMDS)2 based electrolytes were then studied with the addition of high boiling point sulfones to increase the thermal stability of the material. The thermal stability of the electrolyte was increased to 80 °C in a 50/50 (v/v) mixture of butyl sulfone and THF, and reversible electrodeposition was maintained for electrolytes with the addition of butyl sulfone. Other sulfones, such as sulfolane and ethyl methyl sulfone, exhibited poor electrodeposition performance. In particular, it was found that the addition of sulfolane resulted in very low deposition underpotentials, hypothesized to be related to the stabilization of MgCl+. Extended cycling with the sulfone containing electrolytes resulted in soft short circuiting. This is attributed to the formation of high surface area deposits which are caused by large interfacial impedances likely related to the presence of a boundary layer.

Finally, the use of single ion conducting polymers and their application in magnesium batteries is discussed. These materials have intrinsically low ionic conductivities due to the strong magnesium ion coordination with both the polar polymer matrix and with the covalently bound anion. The polymers under investigation were swelled in different solvents ranging in donor number and dielectric constant. Despite achieving conductivities up to 10-4 S/cm, it is found that electrodeposition of magnesium requires more than simply moving magnesium cations to the anode. Small electrodeposits are present after the application of a potential, but galvanostatic electrodeposition could not be achieved. It is suggested that the presence of a large charge transfer resistance limits the electrodeposition of magnesium from single ion conducting gel polymer electrolytes.