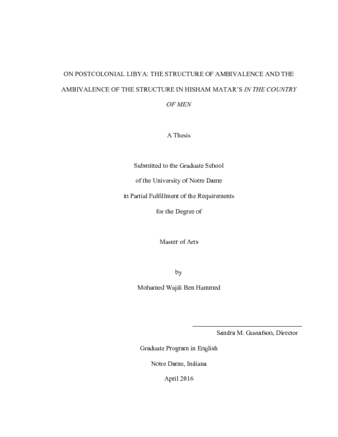 In this thesis, I analyze the theme of subject formation in the novel entitled In the Country of Men by the Libyan author Hisham Matar and connect this biopolitical process to structural conditions that marked Gaddafi’s Libya. I explore the central mode of ambivalence that is enunciated in the narrative and interpret it to be both the affective blueprint of the productive effects of political power on the emerging subject as well as a structure of feeling that reflects the sense of life in a certain period of Libyan social organization under the Jamahiriya regime. The social atmosphere of ambivalence, here, emanates from two structural conditions that permeate both the world of the text and its historical counterpart. The first political condition consists of the social experience of the postcolony as governed by what Achille Mbembe calls “a regime of simulacrum” that the national bourgeoisie and the postcolonial state equally construct. The second condition, which is more specific to the Libyan context, emanates from the performative and improvised nature of the Jamahiriya regime in which the Libyan people were both subjugated and declared sovereign.