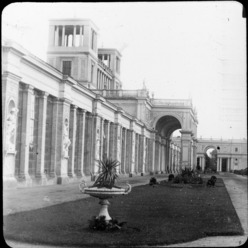 Under Frederick II the Great (1740-1786) Potsdam became the Prussian royal residence. The palace (1745-1747) is on the northwest edge of the Brandenburg suburb and was built on the terraces of a vineyard and surrounded by a park containing further palaces and gardens, which collectively formed the summer residences of the Prussian kings and German emperors. The plans were modelled on the Grand Trianon at Versailles. The palace itself is a single-storey building. Also in Sanssouci park is the Neues Palais and the Charlottenhof Palais. From 1844 the Sanssouci park was extended south-eastwards by the addition of the Friedenskirche (1843-1854) and the Marlygarten. The new Orangerie terraces were added 1858-1860.