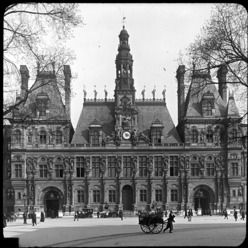 This is the section restored in appearance to the 16th century building; the reconstruction added side wings to the building.

The Hôtel de Ville (French for “City Hall”) in Paris, France, is the building housing the City of Paris’s administration; it has been the location of the municipality of Paris since 1357. In 1871, the Paris Commune chose the Hôtel de Ville as its headquarters, and as anti-Commune troops approached the building, Commune extremists set fire to the Hôtel de Ville destroying almost all extant public records from the French Revolutionary period. The blaze gutted the building, leaving only a stone shell. Reconstruction of the hall lasted from 1873 through 1892 and was directed by architects Théodore Ballu and Édouard Deperthes following an architectural contest. The architects rebuilt the interior of the Hôtel de Ville within the stone shell that had survived the fire. While the rebuilt Hôtel de Ville is, from the outside, a copy of the 16th-century French Renaissance building (the central block) that stood before 1871, the new interior was based on an entirely new design, with ceremonial rooms lavishly decorated in the 1880s style.