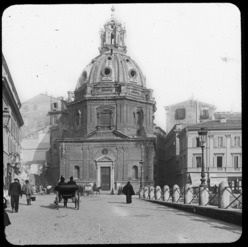 [The lower church is by Antonio da Sangallo the Younger built in 1525. The two side doors and the drum, dome and lantern were added by Del Duca between 1573-1577. Anthony Blunt refers to lantern as “a brilliant but fantastic structure which deeply shocked his successors and was never imitated.”] Two important ecclesiastical commissions for Giacomo date from the mid-1570s. S Maria di Loreto, Rome, had been begun by Donato Bramante ca. 1507 and continued by Sangallo. Built on a restricted site, to a centralized plan, it has a square base and an octagonal drum with a prominent cupola; the small chancel projects at the rear. The lower parts of the church and the principal façade to the south were complete when work restarted under Giacomo, after 1573. The detailing of the body of the church is restrained, but Giacomo’s cupola is a powerful work, with strongly moulded ribs and circular windows in bold, simple frames; it displays his inheritance from Michelangelo in a context too refined for the strength of its forms. The complex lantern, with its pinnacles and colonettes, is too elaborate for the bold expression of the dome. His designs for the flanking façades broadly respect Sangallo’s principal elevation.