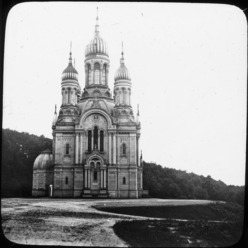 The Russian Orthodox Church of Saint Elizabeth was built on the Neroberg [a hill overlooking the city] from 1847 to 1855 by Duke Adolf of Nassau on the occasion of the early death of his wife Elizabeth Mikhailovna, who died in childbirth. The architect was Philipp Hoffmann. The popular local name translates as “Greek Chapel”. The church was used by the already-existing Russian Orthodox community, mainly Russian guests, for whom Wiesbaden was a popular resort in the 19th century. Even Tsar Nicholas II worshipped in the church during his stay in Germany. Hoffmann used the Cathedral of Christ the Saviour in Moscow as an inspiration.