Brou, Priory Church: Interior view of the choir in apse with original stained glass, Tomb of Philibert in foreground 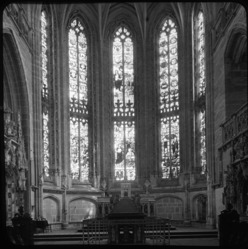 The exceptionally well-lit choir, shielded from the nave by the screen , retains much of its stained glass, executed between 1525 and 1531 by a workshop from Lyon. The axial window contains glass representing Noli me tangere (upper part) and the Appearance of Christ to his Mother (lower part), after engravings by Albrecht Dürer; to the left and right are Philibert and Margaret kneeling with their patron saints, their coats of arms above.

Former Benedictine priory church, dedicated to St Nicholas of Tolentino, near Bourg-en-Bresse, Burgundy, France. Situated on an important road linking the northern provinces with Italy, the church was built by Margaret of Austria, who secured the services of artists from the south Netherlands, Burgundy, Italy and France. It is notable for its surviving rood screen and richly carved choir-stalls (1530-1532), executed by Pierre Berchod (called Terrasson). Margaret, her third husband Philibert II, Duke of Savoy, and his mother, Margaret of Bourbon, are all buried in tombs (sculpted by Conrat Meit) within the church.