Odeion of Herodes Atticus: View over the theatre, from the Acropolis, looking southwest towards the Filopappos Hill 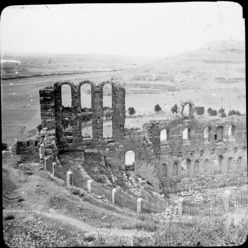 The wealthy benefactor Herodes Atticus undertook to build a third odeion at Athens, in memory of his wife, who had died in AD 161. The odeion of Herodes Atticus rests against the south slope of the Acropolis and takes the form of a typical Roman theatre of the eastern type. A large amount of wood-ash was found all over the cavea at the time of its excavation. This and the fact that there are windows in the upper part of the scaenae frons have been taken as evidence that it was roofed. It is, however, a large building, which could seat 5000 spectators, and its sheer size (76 m wide) makes this unlikely.