Column of Marcus Aurelius: Overall view, of base and column 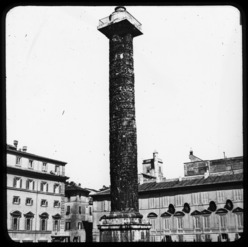 Roman victory column, with a spiral relief, built in honour of Roman emperor Marcus Aurelius and modeled on Trajan’s Column. Because the original dedicatory inscription has been destroyed, it is not known whether it was built during the emperor’s reign (on the occasion of the triumph over the Germanic tribes and Sarmatians in the year 176) or after his death in 180; however, an inscription found in the vicinity attests that the column was completed by 193. As with Trajan’s column, there is an interior stairway. About 3 metres of the base have been below ground level since 1589 when, by order of pope Sixtus V, the whole column was restored by Domenico Fontana and adapted to the ground level of that time. Also a bronze statue of the apostle St. Paul was placed on the top platform, to go with that of St. Peter on Trajan’s Column (27 October 1588). (Originally the top platform probably had a statue of Marcus Aurelius, but it had been already lost by the 16th century.)