Kuthodaw Pagoda: Some of the 729 kyauksa gu or stone-inscription pavilions and a larger shrine 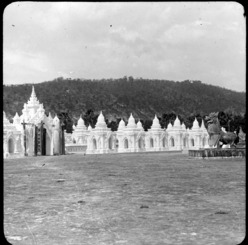 The last capital of the Burmese kings, Mandalay was founded in 1857 by King Mindon (reigned 1853-1878). Mandalay Hill, contained numerous great religious foundations, among them the Ku-tho-daw where 729 stone slabs were engraved in 1857 with sacred Buddhist texts, the Tipitaka, (the entire Pali Canon of Theravada Buddhism), each one protected by a small stone pavilion. It is called the “world’s largest book.” The stupa itself, which is gilded above its terraces, is 188 feet (57 m) high, and is modelled after the Shwezigon Pagoda at Nyaung-U near Bagan.