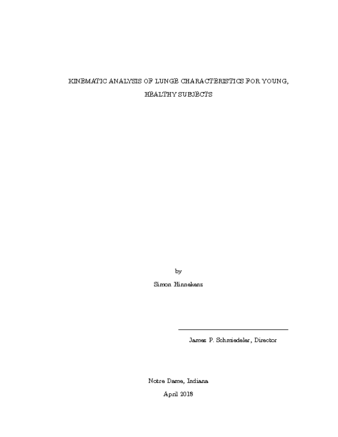 Thanks to improvements in biomedical research, biomechanics now combines physiotherapy with models and simulations using motion capture systems. Among possible movements, the lunge motion is often studied as it is a common exercise for muscular training and rehabilitation in which the hip extensors are the dominant muscles. Long and deep lunges are of particular interest because they require greater hip motion in both front and rear legs. In this thesis, markerless motion capture data from 1200 young, healthy subjects are analyzed to investigate the kinematics of long and deep forward lunges. A 2-way ANOVA showed that body mass index (BMI), gender and/or the interaction of both parameters affect several variables. Long and deep lunges were analyzed for both legs with no significant difference between them for a same variable. Gender was a main factor for peak hip flexion angle, for peak contralateral hip extension angle and for peak knee valgus, with males having a higher peak hip flexion. This gender-related difference may be explained by the higher external femoral and internal pelvic rotations in females, due in part to the greater width of the female pelvis. The interaction of BMI and gender was significant for peak knee flexion angle as well as for peak hip flexion angle. Flexion in the lunge was greater for higher BMI, and the increase for males with increasing BMI was greater than for females. In addition to these variables commonly studied in lunges motion, gender differences were also highlighted in peak mid and lower torso flexion and trunk rotation angles.