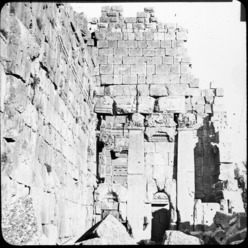 The temple complex consists of a monumental propylaeum, a hexagonal forecourt and a rectangular court containing a centrally placed tower altar and dominated by the vast Temple of Jupiter at its western end.