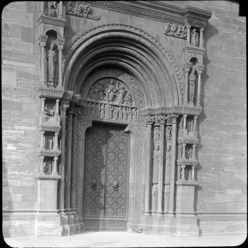 On the tympanum, dating from around 1180, is a relief of Christ sitting in judgment. The Galluspforte also has reliefs of the wise and foolish virgins from the parable described in the New Testament (Matthews 25:1-13).