An Evaluation of the Interactions Between Acute Stress, Cortisol, Oxytocin and Working Memory Performance 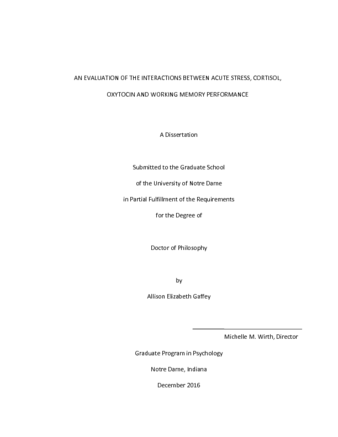 The peptide hormone oxytocin (OT) may influence human cognition by affecting basic processes such as working memory (WM). To date, those effects have not been examined in healthy humans. A second line of research suggests that OT may reduce stress (i.e., cortisol) in men (Heinrichs et al., 2003). Separate evidence indicates that hormones released during acute stress (e.g., cortisol) can impair or enhance WM (Wolf, 2008). Therefore, OT’s stress-reducing (and potential WM) effects may alter the impact of stress on WM performance and levels of cortisol. In a 2 X 2 double-blind design, 100 healthy men received an intranasal dose of OT or a placebo before participating in a stress or control procedure and completing two counterbalanced WM tasks. Participants who received OT had more errors during the WM tasks than those who received the placebo. Those who received OT and were exposed to stress had significantly greater cortisol than those who only received OT or those who were exposed to stress. OT may affect broader patterns of human behavior by decreasing attention and stimulating increases in cortisol after stress.