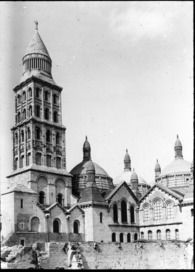 The early 12th-century church of St. Front, Périgueux is a close copy either of San Marco in Venice or its model the Holy Apostles (destroyed) in Constantinople. Such a connection can only mean that the patrons were embarking on a bid to have Saint Front, a shadowy figure who converted the region in antiquity, raised to a status equivalent to that of the Apostles themselves. This bid was probably inspired because the church was one of the pilgrimage sites on the route to the Cathedral of Santiago de Compostela. It is a Greek-cross plan. It is the current cathedral of Périgueux. The church was heavily restored and altered by Paul Abadie in the 19th century.