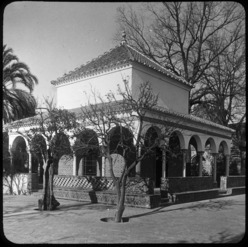 The Dar al-Imara (913-914), the original nucleus of the Alcázar, was built over the old basilica by the Umayyad ruler Abd al-Rahman III (reg 912-961) and was enlarged in the 11th century by a series of fortified walls extending towards the west, which resulted in a new palace complex called Alcázar al-Mubarak, or El Bendito. After the Reconquista the Alcázar became the favourite residence of the monarchs of Castile. Peter the Cruel (reigned 1350-1369) substantially rebuilt (1364-1366) the Alcázar using artists from Toledo and Granada and Sevillian Mudéjar craftsmen. The upper levels of the Alcázar are still used by the royal family as the official Seville residence and are administered by the Patrimonio Nacional.