Strengthening Memory by Repeated Labilization-Reconsolidation Events: The Effects of Stress on Memory Retrieval 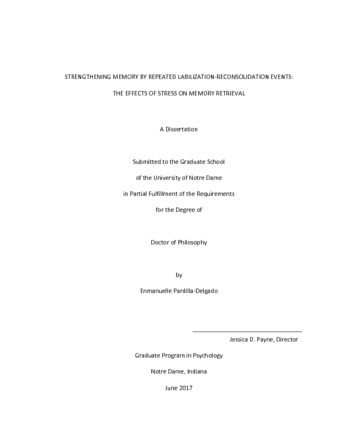 Memory consolidation was once thought to stabilize memories; that is, a memory was immune to alterations after the consolidation process had completed. Currently this view has changed, as reactivating a memory will make the memory labile once again, susceptible to being modified by amnesic and enhancing agents. The process that occurs after this reactivation-dependent labilization is called ‘reconsolidation’, and it is thought that when several labilization-reconsolidation events occur, a memory can be strengthened. The current study aimed to 1) replicate this memory strengthening effect and 2) test, in an ecologically valid way, the efficacy of this memory strengthening process by multiple reactivations. Stress has been robustly shown to be detrimental to memory retrieval. Therefore, we used the Trier Social Stress Test, a psychosocial stressor, at retrieval to probe how resistant memories become once strengthened by repeated reconsolidation. We partially replicated the strengthening effect, as multiple (two but not four) reactivations resulted in better memory. However, no stress or strengthening effects were observed, likely due to low statistical power.