Tate Gallery: Overall view of facade and dome as seen from the Thames 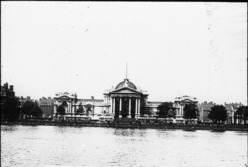 The Tate’s original premises on Millbank, the former site of Millbank Prison. The front part of the building was designed by Sidney R. J. Smith with a classical portico and dome behind. Construction, undertaken by Higgs and Hill, commenced in 1893. The gallery opened on 21 July 1897 as the National Gallery of British Art, but became commonly known as the Tate Gallery, after its founder Sir Henry Tate. There have been several extensions over the years. The central sculpture gallery was designed by John Russell Pope. Renamed “Tate Britain” in March 2000, before the launch of Tate Modern, and now exhibits historic works, including the Clore Gallery of 1987, designed by James Stirling, which houses work by J.M.W. Turner.