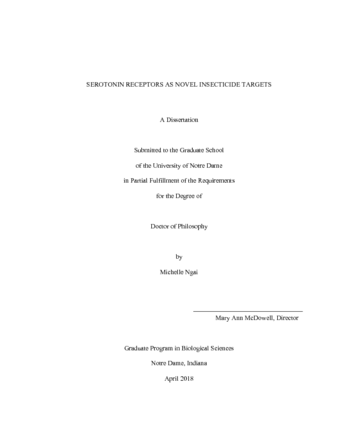 Global changes have caused vector-borne diseases (VBDs) to resurge, inflicting high morbidity and mortality at a disproportionate level in the developing world. While vaccine candidates are moving through the developmental pipeline, insecticides are playing a fundamental role in curbing vector-transmitted diseases. The worldwide emergence of insecticide resistance underscores the necessity of discovering new insecticides with novel modes of action. Recently, G-protein coupled receptors (GPCR) have been identified as a lucrative drug target due to their involvement in a diverse array of insect physiological and behavioral processes. In particular, the serotonin (5-HT) GPCR family, subdivided into 5-HT1, 5-HT2 and 5-HT7, has been implicated in processes paramount to vectorial capacity including feeding and locomotion. Availability of deep-sequencing projects and highly conserved regions of amino acids within the family promoted the identification of 5-HT GPCR target genes in Aedes aegypti and Anopheles gambiae through sequence similarity and homology-based searches. Stage-specific expression profile determined by quantitative RT-PCR aided in the prioritization of genes for targeting of adult mosquitoes versus immature stages, but most importantly, significant levels of expression were observed in the adult female head. Target receptors from each 5-HT subfamily were cloned into the pF9A CMV hRluc-neo Flexi Vector and expressed transiently in the human embryonic kidney (HEK-293) cell line. The GloResponse reporter system and Fluo-4 Direct Calcium assay were utilized to characterize the receptors. Potential agonist and antagonist activity was analyzed through cell-based assays and dose-response curves. Chemical compounds reported to effect invertebrate 5-HT receptors were tested for their impact on locomotion, sugar feeding, and blood feeding via in vivo behavioral assays. Results suggest that the serotonergic system is involved in the modulation of these behaviors. By dampening locomotion and blood-feeding, indirect determinants of vectorial capacity, transmission and burden of VBDs could effectively be reduced. Considering these positive global health implications, the serotonergic system is a compelling target for the novel insecticide pipeline.