Territorial Gains and Losses: The Political Psychology of Issue Indivisibility 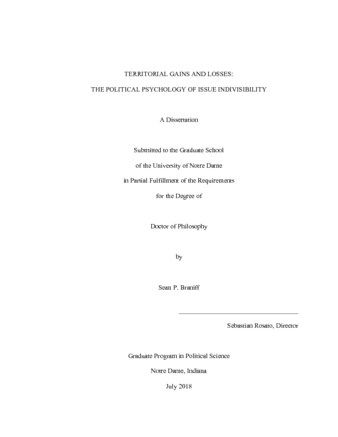 Why do states develop intransigent maximalist preferences in territorial disputes? I argue that shifting relative power dynamics between states with territorial disputes causes dissatisfaction with the status quo. Rising powers feel they are entitled to more than the status quo and set new aspirational references points. Declining powers fail to accept the new status quo and retain the previous status quo as their reference point. When reference points shift such that states view compromise as a loss they develop a preference for territory that is averse to loss, resulting in intransigent maximalist preferences. This argument explicitly draws on the insights of prospect theory. I test my argument using a mixed-methods approach. I first present evidence from a survey experiment in which participants demonstrated a decreased willingness to compromise when primed in the domain of losses. I then present three case studies of territorial indivisibility, namely Israel/Palestine, Taiwan, and Ireland. I test these cases against prominent theories of indivisibility and find that issue indivisibility is an important factor in international relations and that the source of intransigent maximalist preferences lies in the psychology of loss aversion driven by shifting power dynamics.