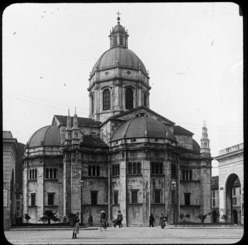 The seat of the Bishop of Como. It is dedicated to the Assumption of the Blessed Virgin Mary. It is commonly described as the last Gothic cathedral built in Italy, construction on it having begun, (on the site of the earlier Romanesque cathedral dedicated to Santa Maria Maggiore), in 1396, 10 years after the foundation of Milan Cathedral. The construction works, begun under the supervision of Lorenzo degli Spazzi di Laino, did not finish until 1770 with the raising of the Rococo cupola by Filippo Juvarra. The imposing west front was built between 1457 and 1498 and features a rose window and a portal between two statues of Pliny the Elder and Pliny the Younger, natives of Como.