Queen's Golden Monastery: Overall view of the complex and spire of the pyatthat 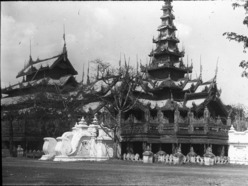 The Queen’s Golden Monastery was constructed in 1885 on the orders of Queen Supayalat, wife of Thibaw, the last king of Burma (reigned 1878-1885). It was barely completed when she was exiled to India with her husband following the annexation of Upper Burma by the British Empire. Now destroyed (burned during WWII), it stood in the grounds of the Royal Palace and was a magnificent gilded teak building richly decorated with ornate woodcarving, mirrored glass mosaic and surrounded by intricate images of dragons. The main shrine room at the eastern end of the monastery was crowned by a seven-tiered spire known as a pyatthat, supported on the internal pillars. The pyatthat was a symbolic form demarcating sacred space and its use was restricted to royal and religious architecture.