Royal Courts of Justice: Raking view of the facade facing the Strand, showing the clock tower at the end 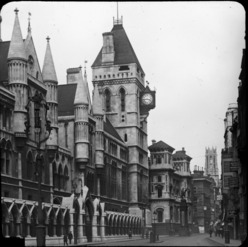 The London Times criticized the clock when first built: “Mr Street’s new clock at the Law courts, hung out in the picturesque style of Bow Church, is surely too trivial and small.”

The Royal Courts of Justice, commonly called the Law Courts, is the building in London which houses the Court of Appeal of England and Wales and the High Court of Justice of England and Wales (Supreme Court). It was opened by Queen Victoria in December 1882. It is on The Strand, in the City of Westminster, near the border with the City of London (Temple Bar) and the London Borough of Camden. It is surrounded by the four Inns of Court and London School of Economics.