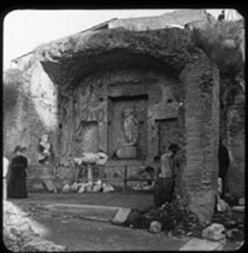 An archaic altar dedicated to the god Saturn. It was constructed in the sixth century BCE and continued to be used until the Roman Empire collapsed, It is located in front of the Temple of Saturn in the Roman Forum. Its remains were uncovered by Rodolfo Lanciani in 1902.