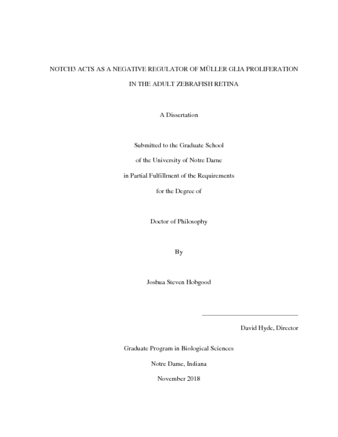 The adult zebrafish possesses the ability to regenerate injured and lost photoreceptors following light-induced damaged. During regeneration a subset of Müller glia undergo an asymmetric division to produce a population of transiently amplifying neuronal progenitor cells (NPCs). These NPC cells then migrate to the outer nuclear layer (ONL) where they differentiate to replace the lost rod and cone photoreceptors. A complete understanding of the mechanisms that this process remains relatively unknown. Notch signaling has been implicated in both retinal development and regeneration, and often serve to regulate cellular proliferation and differentiation. Specifically, Notch signaling is suppressed in response to light damage in the adult zebrafish retina and inhibition of Notch is sufficient to induce a proliferative response in the absence of cellular damage.

There are four Notch receptors in the zebrafish. The expression levels of each Notch receptor gene was examined, and each receptor was inhibited prior to light damage via morpholino-mediated knockdowns. notch1a, notch1b, and notch2 were all upregulated in response to light damage and shown to be necessary for Müller glia dedifferentiation and NPC amplification. Notch3 expression was localized to quiescent Müller glia and downregulated in response to light damage. Knockdown of Notch3 was sufficient to induce a higher number of Müller glia to dedifferentiate and proliferate for a prolonged period of time; producing a substantially higher population of NPCs. The Notch3 knockdown elicited increased expression of the downstream target her4 and suppression of her6 and her9. The present increased pool of NPCs upregulated Atoh7 and successfully differentiated with a bias towards INL neuronal cell types. The canonical Notch ligands deltaA, deltaC, deltaD, and dll4 were shown to be upregulated in response to light damage and necessary for the full proliferative response. deltaA exhibited increased expression in the Notch3 knockdowns, but deltaB expression most closely resembled the notch3 expression profile. Knockdown of deltaB expression disrupted Notch3 staining and increased the number of proliferating progenitor cells. This implicated deltaB as co-negative regulator of proliferation and established a possible ligand-receptor relationship between Notch3 and DeltaB. This study establishes a unique role for Notch3 among the Notch receptors in the adult zebrafish retina and identifies Notch3 as responsible