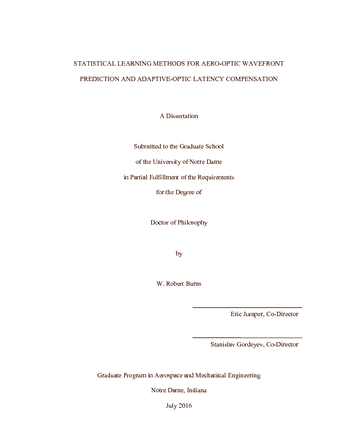 Since the early 1970’s research in airborne laser systems has been the subject of continued interest. Airborne laser applications depend on being able to propagate a near diffraction-limited laser beam from an airborne platform. Turbulent air flowing over the aircraft produces density fluctuations through which the beam must propagate. Because the index of refraction of the air is directly related to the density, the turbulent flow imposes aberrations on the beam passing through it. This problem is referred to as Aero-Optics. Aero-Optics is recognized as a major technical issue that needs to be solved before airborne optical systems can become routinely fielded. This dissertation research specifically addresses an approach to mitigating the deleterious effects imposed on an airborne optical system by aero-optics.

A promising technology is adaptive optics: a feedback control method that measures optical aberrations and imprints the conjugate aberrations onto an outgoing beam. The challenge is that it is a computationally-difficult problem, since aero-optic disturbances are on the order of kilohertz for practical applications. High control loop frequencies and high disturbance frequencies mean that adaptive-optic systems are sensitive to latency in sensors, mirrors, amplifiers, and computation. These latencies build up to result in a dramatic reduction in the system’s effective bandwidth.

This work presents two variations of an algorithm that uses model reduction and data-driven predictors to estimate the evolution of measured wavefronts over a short temporal horizon and thus compensate for feedback latency. The efficacy of the two methods are compared in this research, and evaluated against similar algorithms that have been previously developed. The best version achieved over 75% disturbance rejection in simulation in the most optically active flow region in the wake of a turret, considerably outperforming conventional approaches. The algorithm is shown to be insensitive to changes in flow condition, and stable in the presence of small latency uncertainty. Consideration is given to practical implementation of the algorithms as well as computational requirement scaling