The Politics of Repressive Education Reform: The Institutional Relationship between the Secretaría de Educación Pública and Escuelas Normales Rurales in Mexico During the Cold War 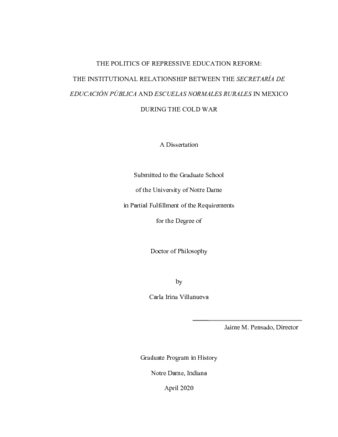 This dissertation is about the national and international politics of education policy supported Mexico’s Ministry of Public Education (SEP) during the Cold War. Education was an avenue through which the country capitalized on its revolution and presented itself as a regional leader. However, education policy was also a space where the state was able to implement repressive strategies against student activism and power on campus. The government created the SEP and the Escuelas Normales Rurales (rural teacher-training colleges) as part of its post-Revolution reforms. The link to the revolution allowed the government to use both institutions, to uphold a national narrative that framed Mexico as a modern and democratic country. Through the bureaucratic structure of the SEP, Mexico aided in the expansion of UNESCO projects by investing in numerous joint projects. In the 1960s, the United States took advantage of the vast UNESCO presence in Mexico by using the joint programs as spaces through which to funnel Cold War aid resources, even when Mexico’s diplomatic position did not support the programs. Simultaneous to Mexico’s assistance in the spread of UNESCO and U.S. agendas, internally, education officials aided in the criminalization of student politics. I focus on the institutional relationship between the Department of Normal Education and the normales rurales. Education officials reinforced the public anxieties of the period by using campus policies and disciplinary actions as a way to combat student activism. The SEP’s reactions to students were manifested in changes to admissions, scholarships, attendance, and travel policies. The SEP’s systematic use of policy, as a tool to control student power on campus, escalated throughout the 1960s, and exploded in 1969, when the SEP implemented a punitive education reform that closed down half of the then twenty-nine campuses.