The Organ Masses of Gaston Litaize (1909-1991): The Culmination of a Twentieth-Century Liturgical Genre 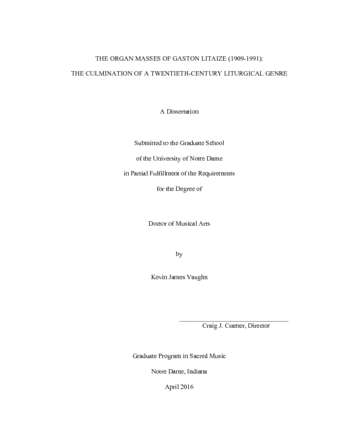 Throughout his long career, Gaston Litaize contributed significantly to the cultural and religious life of the French nation as a concert organist, teacher, and church musician. He is remembered in particular for his long tenure as director of religious programming for French national radio, organiste titulaire at the church of Saint-François-Xavier in Paris, and professor of organ at the Institut National des Jeunes Aveugles and the Conservatoire à Rayonnement Régional de Saint-Maur des Fossés. Even though respect for his memory and music lives on in France, especially through his many students, Litaize’s compositions remain relatively unknown and unperformed in the United States. No significant scholarship has explored his organ music in regard to its relationship to other prominent works of the twentieth-century French organ school or its contribution to the various musical genres in which he composed. In order to contribute to a wider appreciation of Litaize’s musical influence and legacy, this project focuses on his liturgical music for organ in three of his organ Masses: the Grande Messe pour tous les temps, 1948; the Messe basse pour tous les temps, 1949; and the Messe de la Toussaint, 1964. These three works represent the culmination of the organ Mass genre before its demise during the liturgical revisions in the Roman Catholic Church prompted by the Second Vatican Council (1962-1965). Detailed analysis of these three organ Masses will reveal Litaize’s compositional language to be a synthesis of the symphonic techniques of Louis Vierne, the virtuosity of Marcel Dupré, and the Gregorian chant-based spiritual mysticism of Charles Tournemire. Litaize’s effortless facility with complex compositional devices, especially fugue and canon, also marks him as the heir to the contrapuntal tradition of organ music in France. No other French organist-composer of his generation displays an equivalent mastery of counterpoint, either in composition or in improvisation. In these three organ Masses Litaize produced works of great craftsmanship and beauty that represent the culmination of a now extinct twentieth-century French musical and liturgical genre. In addition, this music proves that Litaize himself was the greatest proponent of historically-informed, yet innovative, contrapuntal organ music in the twentieth-century French organ school.