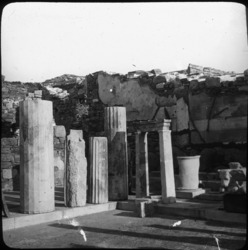 Delian houses, some of which are famous for their mosaics and paintings (e.g. the House of Dionysos, House of the Trident, House of the Dolphins etc.), constitute the island’s most exceptional architectural remains. In their surviving state they represent the urban development of the 2nd and 1st centuries BC, stimulated by the influx of foreign merchants. They conform to a characteristic ancient Greek house plan with a central courtyard surrounded by various rooms. In the most opulent houses the central courtyard contains a peristyle, which provided a covered walkway between the courtyard itself and the rooms.