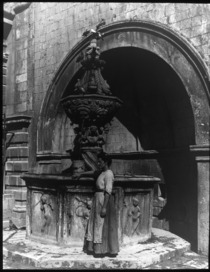 Image is in Flickr set, but not in thumbs or records (created a record). Invented probable filename.

Built in 1438 by Onofrio di Giordano della Cava (from Naples), the fountains are part of an elaborate water supply system. The 16-sided domed reservoir (the large or great fountain) was built in honor of the new water works, a 12 km (7 mile) aqueduct system from the Dubrovnik River to the city fountains. It stands inside the Pile gate next to St. Savior’s church. The small fountain (which stands at the opposite, eastern end of the Stradun near the tower) has sculpture by Italian sculptor Pietro di Martino.