Saint Martin's Cathedral, Utrecht: Overall view of the surviving part of the Dom, with the Domplein in front 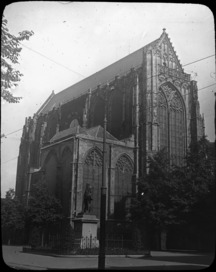 In 1251 fire destroyed part of the 11th-century cathedral. Rebuilding started after 1288, but a plan had already been made in 1254. The choir is heavily influenced by French Rayonnant churches. About 1315 the transepts were reached, but not built. Between 1321 and 1381 a single tower 112 m high was erected to the west of the old Romanesque nave. The Gothic transepts and the nave were built during the 15th century and early 16th, but the nave collapsed during the storm of 1674 and was never rebuilt. This means the Dom Tower stands apart from the main church; the void is now a square with large trees, the Domplein. It has been a Protestant church since 1580.