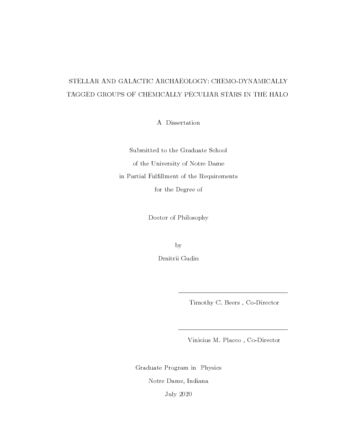 The past two decades have witnessed the emergence of an array of large-scale astronomical surveys of the Milky Way. As a result, photometric and spectroscopic data for many millions of stars in the Galaxy, including hundreds of thousands of ancient metal-poor stars in the Galactic halo, have been obtained. The hundreds to thousands of so-called chemically peculiar stars presently recognized from these surveys can shed light on the chemical nature and birth environments of early generations of stars in the Universe. In this thesis, I carry out a chemo-dynamical analysis for two sets of chemically peculiar stars - r-process-enhanced (RPE) stars, and carbon-enhanced metal-poor (CEMP) stars.

The sample of RPE stars includes a total of 426 stars with available accurate dynamical information and high-resolution spectroscopic abundances of iron, carbon, strontium, barium, and europium. A Friends-of-Friends clustering algorithm is used to identify 24 Chemo-Dynamically Tagged Groups (CDTGs) in these data, which are demonstrated to exhibit significantly lower dispersions among their elemental abundances compared with random draws from the full sample. This result strongly implies that the stars within most of these CDTGs share common chemical-evolution histories, and were likely formed in low-mass galaxies accreted into the Milky Way halo.

These methods are also applied to a literature compilation of 223 CEMP stars with available dynamical and elemental-abundance information. While the elemental-dispersion results for the 17 identified CDTGs are only marginally significant when applied to the entire sample, when the individual CDTGs are separated into the morphological groups in the so-called Yoon-Beers diagram of A© vs. [Fe/H], the Group I (primarily CEMP-s and CEMP-r/s) stars exhibit more statistically significant similarities in their full set of elemental abundances, while the Group II (primarily CEMP-no) stars exhibit strong similarities only in [Fe/H]. These results indicate that the CEMP stars in these groups, at least in some cases, have also experienced common chemical-evolution histories, presumably in their parent lower-mass galaxies, prior to being disrupted into the Milky Way’s halo.