Church of San Miguel: Detail, main portal and central section of the tower 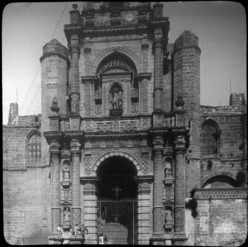 The oldest of the church’s façades, the so-called Saint Joseph façade, was built in 1480 in a style very much inspired by the Flemish. The main façade is a robust Baroque tower, the upper part of which supports a spire covered with azulejos (tile). In the choir, the altarpiece is an extraordinary late Renaissance piece, created by Martínez Montañés with Baroque elements attributed to Juan de Arce. The Baroque-style Chapel of the Holy Sacrament backs onto the wall of the church. It was declared Bien de Interés Cultural in 1931.