The Earliest Steps of Protein Folding: Conformational Biases within the Unfolded Ensemble and during Folding 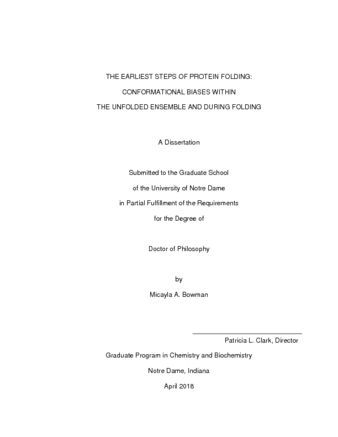 Proper cell function and thus all life processes depend on proteins, which must adopt specific conformations at the right time and place in order to be functional. All proteins start their journey being synthesized by the ribosome as a linear polymer of amino acids and must make a transition from a disordered, unfolded ensemble to a functional folded structure. The transition can occur during synthesis (co-translational folding), or later in the protein’s lifetime (intrinsically disordered proteins or IDPs). The thermodynamic hypothesis of protein folding originally introduced by Christian B. Anfinsen states that the protein native state is the global energy minimum of a polypeptide. This view is consistent with the behavior observed for many small, simple protein structures, but is not sufficient to explain the observation that most proteins misfold and aggregate during classic test tube refolding experiments. In order to natively fold and avoid intermediates that may lead to misfolding and aggregation, many proteins must fold under kinetic control.

In this work I propose that biases in the unfolded ensemble and vectorial appearance of the polypeptide during translation (or analogously the vectorial appearance a polypeptide may experiences as it crosses a membrane) are tools used by the cell to gain kinetic control of the protein folding pathway. While generally appreciated that the unfolded state is a highly dynamic ensemble of rapidly interconverting conformations, the conformational biases and how the sequence of amino acids shapes the ensemble is poorly understood. Using new analysis tools and a large, hydrophobic IDP I show that the patterning of hydrophobic or charged amino acids govern the intramolecular polypeptide behavior. I develop a novel refolding assay with a fluorescent protein sensor to directly measure the effects of vectorial polypeptide appearance on protein folding. Finally, using in vivo and in vitro approaches, both the shape of the unfolded ensemble and vectorial appearance are examined in the context of an autotransporter virulence protein, pertactin. I propose that expanded unfolded ensemble of pertactin serves a functional role by preventing aggregation and promoting efficient secretion to the cell surface. The principles discussed in this dissertation are universal to all proteins, and can be applied to various systems in order to gain a better understanding of protein folding and the molecular basis for disease.