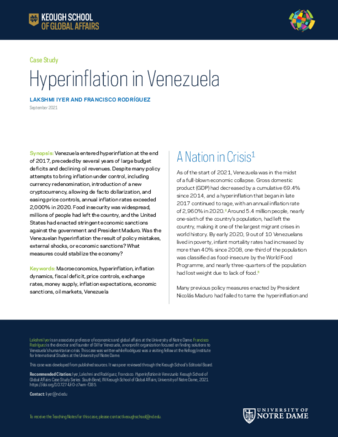 Venezuela entered hyperinflation at the end of 2017, preceded by several years of large budget deficits and declining oil revenues. Despite many policy attempts to bring inflation under control, including currency redenomination, introduction of a new cryptocurrency, allowing de facto dollarization, and easing price controls, annual inflation rates exceeded 2000 percent in 2020. Food insecurity was widespread, millions of people had left the country, and the United States had enacted stringent economic sanctions against the government and President Maduro. Was the Venezuelan hyperinflation the result of policy mistakes, external shocks or economic sanctions? What measures could stabilize the economy?

To receive the Teaching Notes for this case, please contact keoughschool@nd.edu.

This DOI is the best way to cite this case study.