Analytification and Its Model Theory 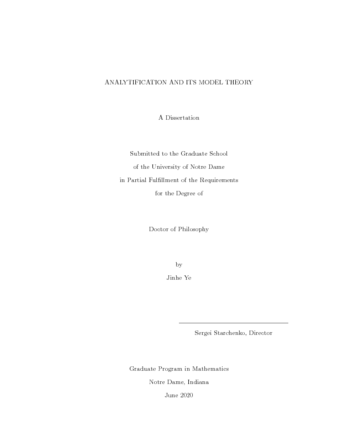 This dissertation is a collection of results centered around the study of Hrushovski and Loeser’s stable completion of V, which can be viewed as a model-theoretic analog of the Berkovich analytification. The stable completion of V is naturally a subset of the space of types on V. Each chapter of the dissertation consists of one aspect of the study and the results are largely independent. As a result, each chapter contains a section of preliminaries and introductions on its own and hopefully is self-contained.

Following Hrushovski and Loeser, Chapter 1 is dedicated to an attempt to study various “analytification” functors in various theories via the study of “tame pairs” as introduced by van den Dries and Lewenberg. We proved theorems analogous to Marker-Steinhorn theorem on o-minimal structures for various other theories. Our approach of proving pro-definability of certain spaces of types is via uniform definability of types in those theories. Moreover, we introduced the bounded completion of V. We propose it as a candidate of Huber’s analytification( adic space). In the later part of the chapter, we will discuss the structure of the bounded completion of a curve C in detail. This part of the thesis is based on join and part of a subsequent paper of the author with Pablo Cubides Kovacsics that will be made available soon. Due to the time constraint, we could not include the results in the subsequent paper that are yet to be polished.

Chapter 2 consists of a study of definable group actions following Peterzil and Starchenko. For a definable group G defined over a model K of some o-minimal theory, we consider the equivalence relation given by the “infinitesimal subgroup” of G on its type space. The group G acts naturally on the set of equivalence classes under the above-mentioned equivalence relation. In the o-minimal case, the stabilizer of the equivalence class of p is a torsion-free solvable definable group when p is unbounded and definable. In the particular case when p is one-dimensional, the stabilizer of its class is exactly the Peterzil-Steinhorn subgroup of G. We prove analogue results of the above in the setting of groups definable in algebraically closed fields (ACF) and algebraically closed valued fields (ACVF). The ACF part is based on the joint work of Moshe Kamensky, Sergei Starchenko and the author and the ACVF part is based on a paper by the author.