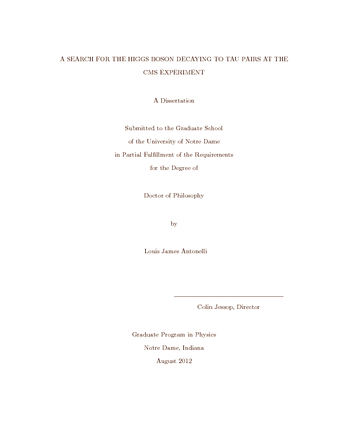 This thesis describes an experimental search for the Higgs boson. The search has been carried out at the Compact Muon Solenoid experiment using proton- proton collisions produced by the Large Hadron Collider. The dataset analyzed corresponds to the 4.6 fb-1 of data taken at √s = 7 TeV during the 2011 running period. This analysis attempts to identify events in which a Higgs decays to two tau leptons and one tau decays electronically and the other decays hadronically. A search is performed for a Higgs as predicted by the Standard Model of Particle Physics, and additionally a search is conducted for a Higgs in the context of the Minimally Supersymmetric Standard Model. The results are consistent with the background expectations and so upper limits are placed on the Higgs production cross-section times the branching ratio to tau leptons. In the Standard Model Higgs search, this analysis is able to exclude a Higgs at roughly 5x the Standard Model prediction.