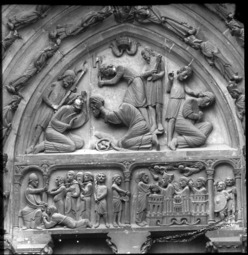 Work on the portal may have been initiated before Suger’s death (1151). Damaged during Revolution and was both re-cut and restored.

Former Benedictine abbey (cathedral since 1966) in France, situated in the northern suburbs of Paris. The first church on the site was built in the 5th century ad, and Saint-Denis was the principal French royal monastery from the 7th century until the Revolution. Founded as the tomb and shrine of St Denis (died ca. 258 CE), evangelist and first bishop of Paris, the church became the main burial-place of the French kings and the depository for their regalia. The first half of the 12th century was particularly significant in its history, when Denis achieved recognition as the patron saint of France and the abbey attained the rank of chief church and spiritual heart of the kingdom. The partial rebuilding carried out under Abbot Suger, who left written accounts of his activities, has been interpreted as the first full expression of the Gothic style. The architectural history of Saint-Denis has three main phases: Carolingian, Early Gothic and Rayonnant.