Sanctuary of Athena Pronaia at the Marmaria: Tholos: Detail, base of tholos 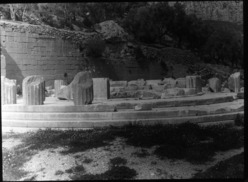 One monument at Delphi had a particular influence on the architecture of the 4th century BCE. This was the Doric Tholos (ca. 390 BCE), built at the Marmaria, of Pentelic marble, by Theodoros of Phokaia. This was the only peripteral tholos of its time and the most ornate sacred building since the Parthenon. It had 80 sculpted metopes (40 over the 20-column peristyle and 40 over the cella wall), acroteria on top of the marble roof and 9 chryselephantine statues between 10 internal Corinthian columns. The latter helped to popularize the Corinthian order, while the peristyle hastened the development of more slender Doric columns, and the lavish double gutter created a fashion for gutters decorated with lions’ heads between acanthus scrolls (especially at Epidauros). The Tholos as a whole stimulated the construction of great circular buildings at Epidauros, Olympia and Samothrace.