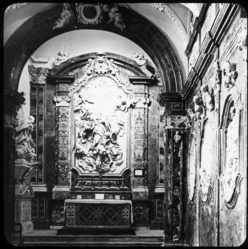 Two baroque chapels were added in the 17th and 18th centuries, which are shut off from the rest of the church. Chapel of St. Benedict has a high-relief on the altar representing the Glory of St. Benedict, made by Ignazio Marabitti in 1776.

[Cloister is now a State Art Institute for mosaic work.] It was formerly a Benedictine monastery. The foundation of the monastic house of S Maria Nuova by King William II of Sicily marked the climax of Norman ecclesiastical and artistic patronage on the island. The site chosen was on a hill overlooking Palermo. In 1176 one hundred Cluniac monks, under the first abbot, Theobald (reigned 1176-1178), came at William’s invitation from the abbey of Santa Trinità at Cava dei Tirreni near Salerno. It is now known chiefly for the mosaic decoration of its church; but the cultural diversity of Norman rule in Sicily is exemplified by the contrast between the Byzantine mosaics and the sculpture of the cloister capitals, which is predominantly Romanesque. Sculptors from Lombardy, and further afield in the Latin world, Greeks from Sicily and the Italian mainland, and Sicilian Arabs all seem to have worked there. William II, who died in 1189, was the last ruler to be buried here; intended as the ‘Saint-Denis of the Hautevilles’, Monreale did not maintain its position after the downfall of the dynasty.