Royal Chapel of Granada: Interior, reredos or grille of the Royal Chapel 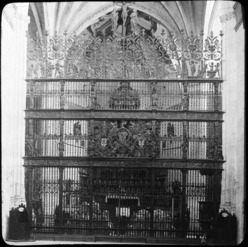 In Spanish churches the reredos grew to be as wide as the nave and reaching to the vaulting of the roof. The Plateresque grille made between 1518 and 1523 by Bartolomé of Jaén, is considered as a masterpiece of Spanish metalwork. It is structured by way of an altarpiece, into three bodies whose dimensions drop in height, five vertical sections and cresting, which include the Crucifixion and scenes of the Passion of Christ.

The Capilla Real was the mausoleum of the Spanish royal family, including the Catholic Kings, until the founding of the Escorial by Philip II. The influence of Cisneros is evident in the severe plainness of the building, although the splendid vaults and portals are among the finest in the Hispano-Flemish style. Monuments in the Capilla Real include the tombs (1514-1517) of Ferdinand II and Isabella by Domenico Fancelli, and of Joanna and Philip I (from 1519) by Bartolomé Ordóñez. Some of Isabella’s art collection remains in the sacristy (now Sacristy Museum) of in the Capilla Real. The double tomb by Fancelli is his finest work and is significant in the introduction of the Renaissance style to Spain. The ornate interior of the Capilla Real, with the royal tombs, the great retable by Felipe Vigarny (1521), the fine grille and the superb collection of paintings, make it one of the most important historic and artistic buildings in Spain.