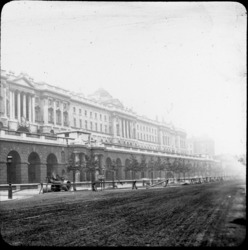 The central inset colonnade with its pedimented attic above and dome behind provides a discreet central emphasis. (Sir Banister Fletcher). Construction of the Victoria Embankment to the designs of Sir Joseph Bazalgette began in 1864 and was completed in July 1870.

Somerset House is a large building situated on the south side of the Strand in central London, England, overlooking the River Thames, just east of Waterloo Bridge. The central block of the Neoclassical building, the outstanding project of the architect Sir William Chambers, dates from 1776-1796. It was extended by classical Victorian wings to north and south. A building of the same name (a former royal palace) was first built on the site more than two centuries earlier; this was demolished. It once fronted directly on the Thames, but the Victoria Embankment filled in the area (1864-1870). It is now occupied by the Courtauld Institute of Art, including the Courtauld Gallery and other entities.