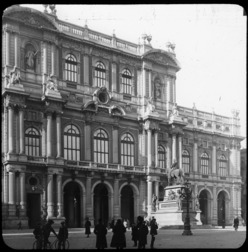 The nineteenth-century rear façade (not the curved Baroque facade) of the Palazzo Carignano facing on Piazza Carlo Alberto.

Guarini’s most renowned achievement in secular architecture is the Palazzo Carignano in Turin. The palace was originally designed to have four wings around a large courtyard, but it was completed in 1683 as an open three-winged composition; decorating and finishing continued well into the 18th century. It is most noted for the curved facade. The facade of the central block is formed with two sinuous S-curves. In the middle is a tall, oval cylinder, which is joined by sweeping counter-curves to the rectilinear end bays of the wings. This type of curved inflection was an innovation in Italian Baroque palace design, although Bernini had featured an oval pavilion connected to side bays in his first project for the east front of the Louvre (1664), which Guarini may have seen during his time in Paris. From 1848 to 1861 the palace was used for the House of Deputies of the Subalpine Parliament; today it is a museum.