Final Report: Workshops to Gauge the Impact of Requirements for Public Access to Data Produced by NSF-funded Research in Mathematics and the Physical Sciences 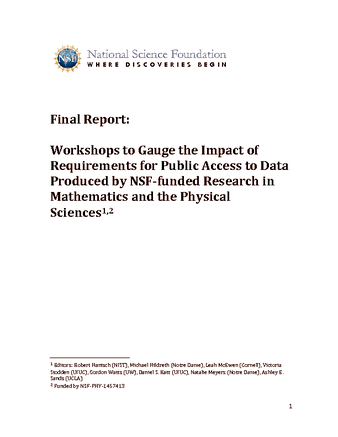 This report is a direct result of consultation with the research communities funded by the Mathematical and Physical Sciences (MPS) Directorate at the National Science Foundation (NSF). The goal of this effort is to provide feedback to NSF on current best practices with regard to research data curation, discovery, access, preservation, and re-use, and suggestions for areas of improvement and investment that could facilitate broader curation of, access to, and re-use of research data in the future. Sponsored by an NSF award (NSF PHY 1457413), the consultation process consisted of two workshops and extensive community outreach. The first of the two workshops was held in Arlington, VA, on November 19 and 20, 2015. Attendees represented the various MPS domains, and also included archivists, librarians, publishers, and computer scientists. The ideas that emerged from the first workshop were captured in a draft report shared with the broader community of MPS-funded researchers. Outreach efforts included presentations at several professional society meetings and a survey of authors whose work is published in American Physical Society (APS) journals. A second workshop was convened in December 2016 to accept and respond to the input collected following the release of the draft report, and to produce this final report.